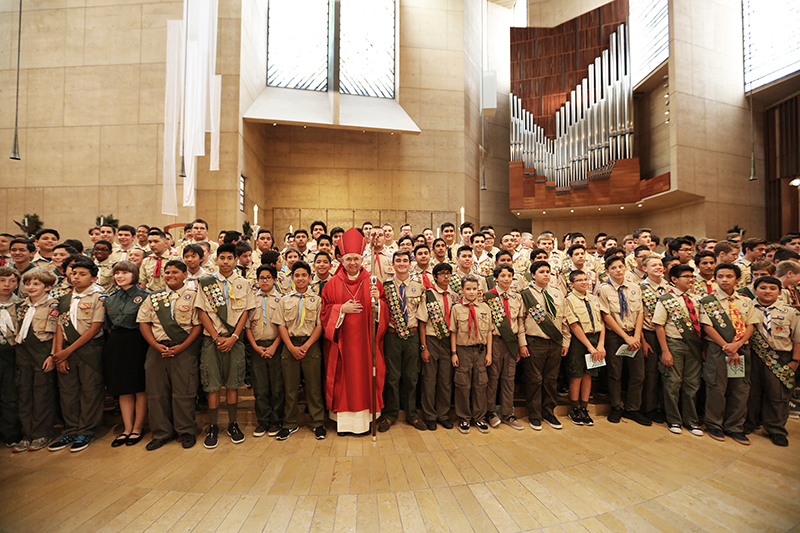 A flood of brown and olive green filled the Cathedral of Our Lady of Angels on May 15, as more than 100 Boy and Girl Scouts and scoutmasters in full uniform attended the 90th annual Religious Emblem Presentation Mass.

Celebrated by Archbishop José H. Gomez, the Mass featured participating scouts as lectors, altar servers, gift bearers and more, and culminated in the presentation of medals — blessed by the archbishop — to scouts who earned the prestigious Ad Altare Dei and Pope Pius XII emblems.

The Ad Altare Dei (literally “to the altar of God”) program is designed to help Catholic scouts in grade 8 or higher to “develop a fully Christian way of life in the faith community” by teaching them about the seven sacraments, while the Pope Pius XII high school program focuses on “different life choices (single, married, religious, ordained), occupations and ministries in the church as called from God.”

Both programs require a minimum of 20 to 40 hours or more of service within the community. For scouts like high-schooler Nick Burt, who served as a lector during the Mass, the pursuit of both emblems has been immensely valuable to his growth as a young Catholic developing his faith. “I have to admit, earning these awards brought me many new opportunities: volunteering as well as exploring my faith,” says Burt.

“Before these awards, I had a solid grounding in my Catholic faith, but when I started these awards, I began speaking with adults as well as people throughout the community about Catholicism and what it means to them,” he continues. “It gave me so much insight into what it means to people to be in a Church, and what it means to people to be involved in a faith like this. This whole program has brought me closer to God and has brought me so many opportunities that have been so important to me and my growth in life.”

For scoutmasters like Nick’s father, Tim Burt, chair of the Catholic Committee on Scouting for the Archdiocese of Los Angeles, and Thelma Reeves, leading the scouts on their service trips and in their discussions about current issues facing the Church and society has been just as rewarding. “We’re teaching the sacraments, but also we’re teaching service,” explains the senior Burt.

“[It gives them] an incredible awakening in gratitude … and an awakening in possibilities for them. I see them, for the first time, connecting with the broader community,” he says. “I took a group once to a retreat … and there was this young man who had never said the rosary before — and he was blown away by it. … They learn the whole richness of the Catholic experience.”

“They also have the opportunity to share their faith, and that’s an opportunity that a lot of young students in school don’t have,” adds Reeves, who was first drawn to scouting more than 20 years ago by the passion her two sons displayed for the Eagle Scouts.

“And it’s through this program that, through service, they not only enrich their lives with their faith, but they’re also able to share it with the community at large. And I think there’s an awakening on both sides: for the scouts, it’s seeing these people [for instance veterans] that are in hospitals have a richness to them that we sometimes don’t take the time to figure out. … For us as adults to see that, it empowers us because we’re blessed by the transition that we see taking place in them.”

The Religious Emblem Presentation Mass was initiated in 1926 by Msgr. James Dolan. For Nick Burt, being able to share this Mass with his peers from the Los Angeles scouting community is a highlight of his year.

“When I was reading and looking out at the scouts, I could sense an overwhelming feeling of joy in knowing that all of us in the Church at that moment had grown in some way in our faith,” he says. “It was an amazing, indescribable feeling that was very powerful.”